'Watch out Shanghai,’ warns Samba ahead of hurdles clash with Benjamin 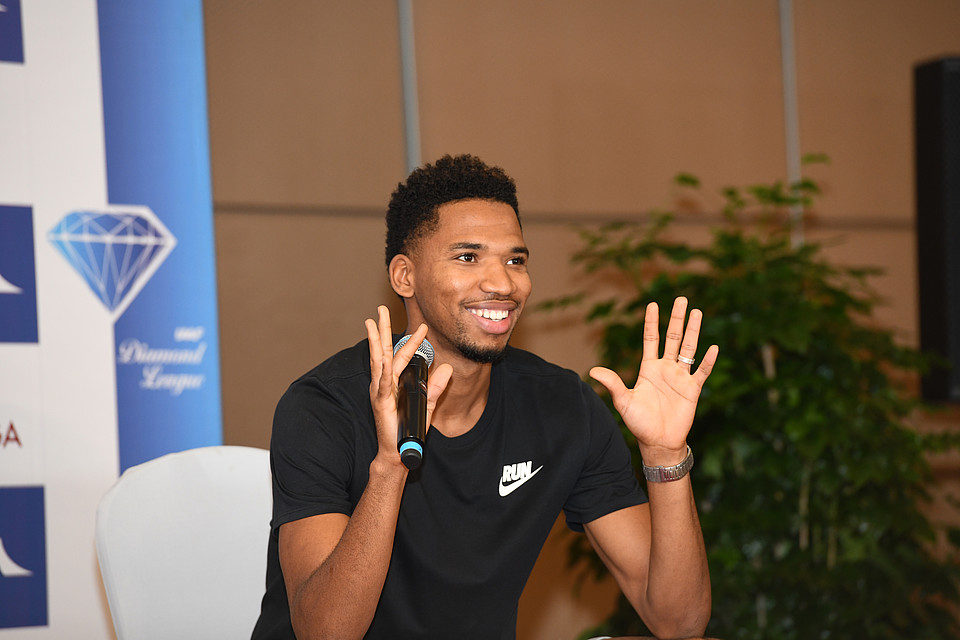 at the press conference of the 2019 IAAF Diamond League Shanghai; Abderrahman Samba

Asia’s 400m hurdles champion Abderrahman Samba sounded a thinly veiled warning on Friday that the world record could be under threat when he clashes with rising US talent Rai Benjamin at Saturday’s 2019 Shanghai Diamond League.

The 23-year-old Qatari was keeping his cards close to his chest when he met the media ahead of his first Diamond League outing of the season, but the man who dipped under the almost unbreachable 47-second barrier last June had a certain ‘watch this space’ twinkle in his eye when asked if the two new stars of one-lap hurdling could push each other under Kevin Young’s mythical mark of 46.78 seconds.

“Always I look forward to running in the Diamond League and to getting the win,” he said. “I want to get that job done and you will have to see what happens tomorrow.”

Young ran his extraordinary time to bag gold at the Barcelona Olympic Games way back in 1992. Few have come close in the 27 years since, and no one else before Samba had dipped below the phantom-like 47-second barrier, an achievement beyond even the event’s most heralded legend, Ed Moses.

So when Samba stopped the clock at 46.98 at the Paris Diamond League meeting last June, it was no surprise that the world record question started to become one of those ‘when’, not ‘if’ kind of queries.

But Samba wasn’t the only athlete entering Young territory last year for Benjamin, then a 20-year-old college runner from UCLA (the University of California, Los Angeles), had already matched Moses’ US record of 47.02 when winning the national collegiate title on his home track at the start of June.

While the former Antiguan – with a famous cricketing father – made that his last race of the year, Samba went on to complete an unbeaten season, gathering Asian Games and Continental Cup titles as he lowered the Qatari record on five occasions and the Asian mark three times.

On Saturday, Samba is looking to extend an unbeaten streak that stretches back to the London 2017 World Championship final, when he was seventh.

He has started this year in similar unbeatable form, cruising to a comfortable victory at last month’s Asian Championships in Doha in 47.51, a reliable indicator, he says, of what lies ahead.

So with Benjamin in the field is that likely to put the world record in reach?

“I started this season with 47.5 and tomorrow I hope to run faster,” repeated the cautious Samba. “That’s the diplomatic answer, and for now and I’m not going to say more. You will have to watch tomorrow.”