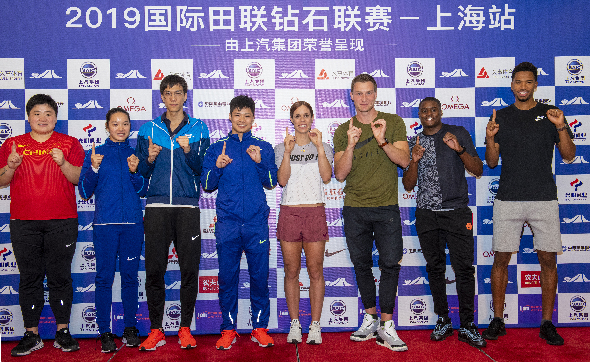 Sprinter Christian Coleman opens his 2019 season with huge expectations after he scorched to a sensational 9.79 seconds to win the Diamond League 100m final in Brussels last August becoming the eighth man in history to dip under 9.80, and running almost a tenth of a second quicker than anyone else in the world in 2018.

German javelin ace Thomas Röhler has made a habit of starting his season with spectacular throws beyond 90 metres and the Olympic champion is prepared to throw that far again tomorrow when he takes on three other men who have breached the magical 90-metre line.

Olympic champion Katerina Stefanídí was a dominant winner of the Diamond League final last year but had to settle for second in the Continental Cup and could only finish fourth at the European Indoor Championships in Glasgow this March. The Greek star makes her 2019 outdoor debut with Yelena Isinbayeva’s meeting record of 4.85m in her sights.

Here is what they told the press:

On the challenge of attempting the 100m/200m double at this year’s World Championships in Doha and next year’s Olympic Games in Tokyo:

“It’s not really a challenge just because I have done it for so long – from college that’s just what I trained for, just being an all around sprinter, even doing the relays, the 4x100m and the 4x400m. That really prepared me for being a professional and trying to go for both events.

“I was supposed to run both last year and ended up getting injured, so I decided to focus on the 100m. But this year it was always the plan to attack both and go for a gold medal in both.

“It’s hard to not look forward to Tokyo and just focus on this season because growing up being an Olympian is something that you dream about and the pinnacle of the sport. But you just have to focus on each day, each week and try to get better at each meeting.”

On his form and fitness ahead of his first major race of the season:

“My off season training has gone really well. It’s been interesting because the World Championships is so far off. So I decided not to compete indoors and push back my speed work to peak later.

“It’s been different, but I’ve been feeling really good in practice and my times have been indicating I am ready to run fast. I feel good and I am excited to see what I can do.”

“All the athletes in the line-up are really good. There’s a lot of young talent there so I’m not necessary just focusing on Su. I’m focusing on me, my race plan and my lane. It’s always interesting to see what you open up with but the main thing is to go out there and compete and win.

“We definitely have some similarities. He is really good at the 60m, and we both get out of the blocks really well and get to top speed really fast. And we both have the same weakness – trying to finish our races.

“I think it will be an interesting race tomorrow and I am excited about it. Let’s see what happens.”

On what he expects for his first Diamond League meeting of the season:

“Over the last two years the start of the Diamond League season has been very special for the javelin and myself. I was able to get away with two wins with two really big throws of over 90 metres. Everybody is seeking 90m now, although this is still magical and special.

“It is about the competition, it is about getting through a really long season, so I am looking for a good start to get me nicely into the first part of the season.”

On his preparations for Saturday:

“My preparations have gone really well. It’s been intense. There has been no magic, no records or anything crazy but we went to back to the roots and worked on a really strong and stable technique, and trying to stay healthy on the way to Tokyo because Tokyo is getting closer and closer.”

On his clash with Rai Benjamin (USA) on Saturday and what time he expects to run:

“I am so excited to compete tomorrow. I started this season with 47.5 [47.51 at the Asian Championships] and tomorrow I hope to run faster. That’s the diplomatic answer and for now and I’m not going to say more. You will have to watch tomorrow.

“Always I look forward to running in the Diamond League and to getting the win. I want to get that job done. Then you will see what happens tomorrow.”

On his beating his time at the Asian Championships of 47.51:

On her chances of beating Yelena Isinbayeva’s meeting record with the Russian world record holder watching from the stands:

“Back in 2016 Yelena made some comments that I think lost her a lot of fans in the pole vault so I don’t think it matters whether she is here or not. I think there are many of us coming in looking at the meet record just as we’d look at any other meet record. I am just expected about competing.”

On her hopes for 2019 after an inconsistent season last year:

“Last year I had an injury at the beginning of the year but I was able to find more form going in to the European Championships and the Diamond League final. I hope not to have to go through that this year and have a more consistent season from the beginning. Maybe that will start with a meeting record here.

“I am feeling much better now than I did before the indoor season when I was sick for four weeks, and I started that with a 74 [4.74m]. Since then training has gone very well and I am healthy and stronger than before the indoors.”