Tearful Liu bows out at the Shanghai Stadium 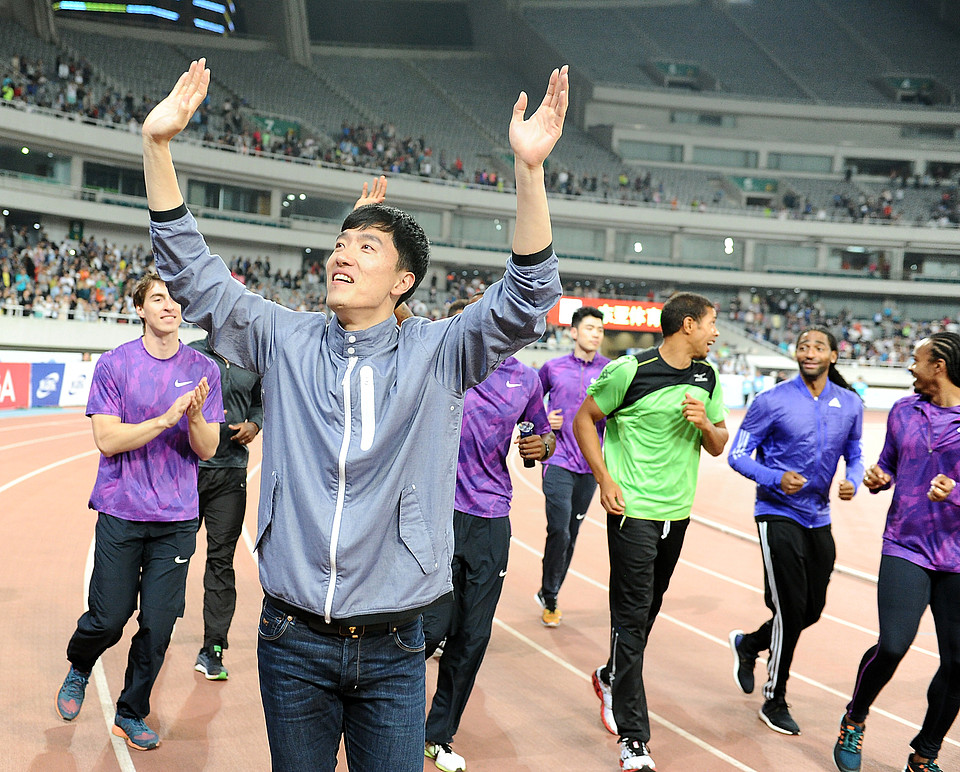 Some 16 years since he first performed there as local teenager, Liu Xiang bid farewell to the Shanghai Stadium on Sunday evening and to his glittering career as an international athlete with a tear in his eye and one last lap of honour around his hometown arena.

China’s favourite, and most famous, track and field star stood on the top of the victory podium at a special ceremony to mark his retirement from the sport and addressed the 40,000 adoring fans who had stayed behind to honour the former Olympic champion after the final race of the 2015 IAAF Diamond League meeting.

That – of course – was the men’s 110m hurdles, an event won by Liu at this meeting four times in his career, and all 10 rows of barriers were still set up on the track behind him as Liu said goodbye, surrounded as ever by ranks of photographers, the years of his great victories and winning times laid out in giant red and white numerals on the ground around him.

“It is a difficult time for me today,” said Liu, his voice cracking with emotion as he clutched a large bouquet of flowers. “I stand in this field and I feel reluctant to leave the track and the hurdles.

“I couldn’t have achieved what I have, or experienced the wonderful life of an athlete, without the support of friends and everyone here.

“When I faced obstacles, I never escaped, I never felt fear, and never gave up the desire to compete.

“I have been moved by your concern for me, your understanding and your encourgement. I am grateful and very honoured.”

The crowd had been treated to a moving film of Liu’s greatest moments, including his Athens Olympic victory in 2004 and his world record of 12.88 two years later, and they’d heard the appreciative words of IAAF president Lamine Diack and vice-president Sebastian Coe.

They’d listened attentively as dignatories from the city government, its sports administration and the Chinese athletics federation paid tribute to Liu’s achievements, among them Shanghai’s vice mayor Zhao Wen and Xiao Tian, the country’s deputy minister for sport, who described Liu as “a legend of Chinese track” as he presented him with an award for his special contribution to Chinese athletics.

That contribution can hardly be disputed for Liu won virtually every honour available in the sport, including Olympic and world titles and world indoor golds, and broke world, world junior and Asian records on numerous occasions.

His crowning achievement, of course, came in Athens in 2004 when he claimed the Olympic title with a world-record equalling run that left his opponents playing catch-up. He made the record his own two years later and took the world title in 2007.

But ever since his Beijing Olympic disappointment in 2008, an event that caused an outbreak of national mourning, Liu has been battling a debilitating Achilles injury, and the 31-year-old finally called it a day just one month ago.

The end of his career may have been beyond his control, but Liu remains, as current world champion David Oliver put it on Saturday, “one of the greatest of all time”.

On Sunday the American paid tribute in the best way possible by winning the Shanghai Diamond League’s showcase event at the end of a meeting at which the crowd had witnessed one of the fastest women’s 5000m of all time by Ethiopia’s Almaz Ayana, and been treated to two home victories thanks to shot putter Gong Lijiao and javelin thrower Lu Huihui, plus numerous encouraging performances by young Chinese athletes emerging from a new generation inspired by Liu’s achievements.

The stuff of races, times and statistics are now part of Liu’s past, of course, but he jogged one last lap of his city’s stadium in the company of Oliver and other fellow hurdlers, such as Aries Merritt, the curent world record holder and Olympic champion, and Jason Richardson, the 2011 world champion, plus the man who would love to be the next Liu Xiang, China’s latest hurdling star, Xie Wenjun.

It’s to Xie and others that Liu now leaves the sport that he has graced so well.

“I have been very honoured to be an athlete,” Liu said. “I am very happy that today I have an opportunity to say goodbye.

“Today I supported my friends, the Chinese athletes, with every step, with every hurdle. I am convinced that from today we will have even more athletes who are even more outstanding.”