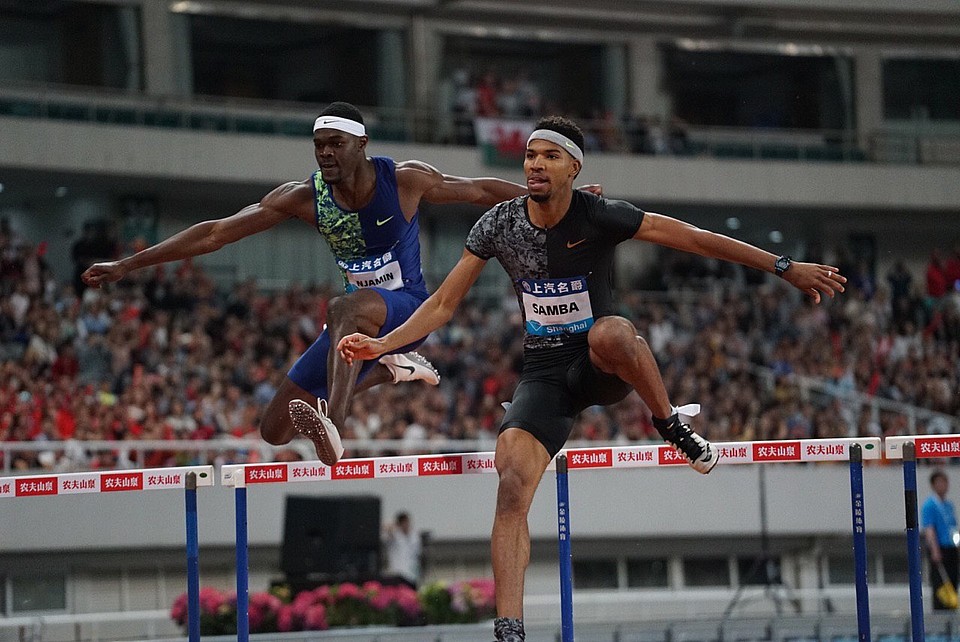 Fireworks were promised and fireworks were delivered by history’s second fastest 400m hurdler Abderrahman Samba as the Qatari lived up to his predictions and delivered a huge meeting record to beat Rai Benjamin at the 10th Shanghai Diamond League.

On a night of specular track and field that saw three meeting records, an Asian record and sixworld leads, it was the first track event on the programme that produced the brightest highlight as Samba overcame a jet-lag induced sleepless night to beat the young rising star of one-lap hurdling.

The 23-year-old Asian champion overhauled his fast-starting US rival at the final barrier and powered home in 47.27 seconds, lowering his own world lead with his second best time ever.

“It is an amazing start to the season running 47.2 at the first Diamond League race of the season,” said Samba. “It was a great race and Rai and I pushed each other to the line.

“I couldn’t sleep last night at all but I feel great now. It’s amazing”

As for Benjamin, the 21-year-old, who posted the third best time ever last June, was delighted to run 47.80 on his first professional outing at the event.

“I was good to hurdles nine and 10 so I can’t really complain,” he said. “’It was my race plan to go out strong; he just had it at the end and I didn’t. For a season’s opener it’s pretty good.”

The rest of the field were miles behind, Ireland’s Thomas Barr clinching third in a distant 49.41.

There was emotion of a different kind in the sprint hurdles as a mourning Omar McLeod channelled all his grief to claim a fourth successive Shanghai victory ahead of Chinese favourite Wei Wenjun.

McLeod made history last year when he completed his hat-trick and the world and Olympic champion graced his favourite one-meeting again with a dominant display over the barriers. Leading from the start, he already looked a clear winner at half-way and held on to win in 13.12 as Wei closed him down on the run-in.

The Asian champion made a bold bid for victory in the meeting’s blue riband event, and was rewarded with a personal best of 13.17.

If last year’s win was a joy for McLeod, this was emotional for a different reason, as he revealed afterwards.

“It was difficult mentally to compete today as my auntie Tracey died yesterday,” he explained. “I asked myself what would she want, and she would want me to race.

“It was hard today. I just wanted to finish, win and get the job done. When I crossed the line started crying. I dedicate my win tonight to her memory.”

While there were tears after the hurdles, there were grins of joy after the 100m when Noah Lyles brought the meeting to a close with hair’s breadth victory over event favourite Christian Coleman as together they knocked the world lead down to 9.86.

Coleman looked a clear winner at half-way when he had a metre lead, but the world indoor record holder has admitted his weakness is finishing, and that was evident here as Lyles closed hard over the last 20 metres.

“Yeah, I was definitely pleased with that time,” said the 21-year-old, who celebrated his personal best by leaping about in delight in front of the home stand. “I mean, woah! I am very excited, as you can see."

In the women’s dash Diamond League debutante Aleia Hobbs powered away from two of the world’s most decorated sprinters after running with a broken right wrist. Last year’s US collegiate champion pushed out of the blocks off her strapped-up hand and moved clear of the rest at half way to beat Olympic champions Blessing Okabare and Elaine Thompson in 11.03.

“Wow,” said the overjoyed American afterwards. “Today is my biggest win. I needed to start well and I managed to hang on.

“I fractured my wrist two weeks ago playing laser tag but I have not missed too much training. It has mainly been block starts over the past couple of weeks.”

Fred Kerley led a US sweep in the men’s 400m, finishing well clear of Michael Cherry and Nathan Strother in 44.81, while Bahrain’s race favourite Salwa Eid Naser held off the challenge of US wonderkid Sydney McLaughin to win the women’s one-lapper in 50.65.

Aaron Brown triumphed over fellow Canadian Andre de Grasse in a men’s 200m missing Turkey’s world champion Ramil Guliyev who had to pull out on Friday with a severe cold.

World record holder Beatrice Chepkoech added a Shanghai meeting record to her growing collection of honours as she ran solo to victory in the women’s 3000m steeplechase in 9:04.53, easily the fastest time in the world this year.

Twelve months ago, Chepkoech clinched a dramatic win when her compatriot Norah Jeruto fell after the final barrier, but this time it was all too easy for the Kenyan who cruised away from the field at 2000m and won by more than six seconds from Celliphine Chespol.

Yomif Kejelcha declared himself “amazed” by his performance in the 5000m in which he prevailed over fellow Ethiopians Selemon Berega and Hagos Gebrhiwet thanks to a 53.28 last lap that brought him to the line in 13:04.16, more than six seconds inside his own world lead.

“My power is so much better at the end of the race,” added the world indoor 3000m champion after leaving last year’s quickest 5k runner in his wake.

Another world leading time fell in the women’s 1500m when Morocco’s Rababe Arafi held off  Guduf Tsegay in the home straight to win in 4:01.15. The Ethiopian was a tenth behind as six finished under 4:02.

Lyu Huihui picked up where she finished a year ago – by setting a meeting record to win the women’s javelin. The Asian record holder defended her Shanghai title in commanding fashion with three throws further than anyone else in the field, the longest a second round effort of 66.89m to extend her MR from 12 months ago by 4cm.

“I still have room for improvement,” promised Lyu afterwards.

Lina Muze was the best of the rest, the Latvian producing a huge personal best of 64.87m to take second ahead of Germany’s Christin Hussong.

But there was disappointment for Lyu’s teammate Gong Lijiao as her bid for a fifth Shanghai shot put title foundered at the hands of Chase Ealey.

The US thrower came close to her world leading PB from last month with 19.58m, enough to beat China’s favourite field eventer by 14cm.

“To compete against Gong Lijiao was actually a little nerve-wracking because I have looked up to her for so long,” said Ealey.

The magic 90-metre mark proved to be beyond the men's javelin throwers but Andreas Hofmann won't mind about that after he took maximum points with a world leading heave of 87.55m.

That was enough to beat Chao-Tsun Cheng of Taipei while his German teammate, Olympic champion Thomas Rohler could only place fourth with a best of 82.95m.

Li Ling set the stadium alight in the women’s pole vault when she raised her own Asian record by 2cm to take third behind Olympic champion Katerina Stefanidi and her fellow Greek Nikoleta Kiriakopoulou.

All three cleared 4.72m, as did USA’s Sandi Morris in fourth, but Stefanidi triumphed thanks to a clean series.

“I am really pleased with my performance today,” said Li, who is coached by Vitaliy Petrov, whose former students include world record holder Yelena Isinbayeva, an interested onlooker in the stands.

Stefanidi had hoped to erase the Russian’s meeting record of 4.85m but had to settle for the points.

There was more joy for China in the men’s jumps as Wang Yu took victory in the high jump on countback with 2.28m, while Wang Jianan led the long jump until round five when Jamaica’s Tajay Gayle pinched the win, 8.24m to 8.16m.