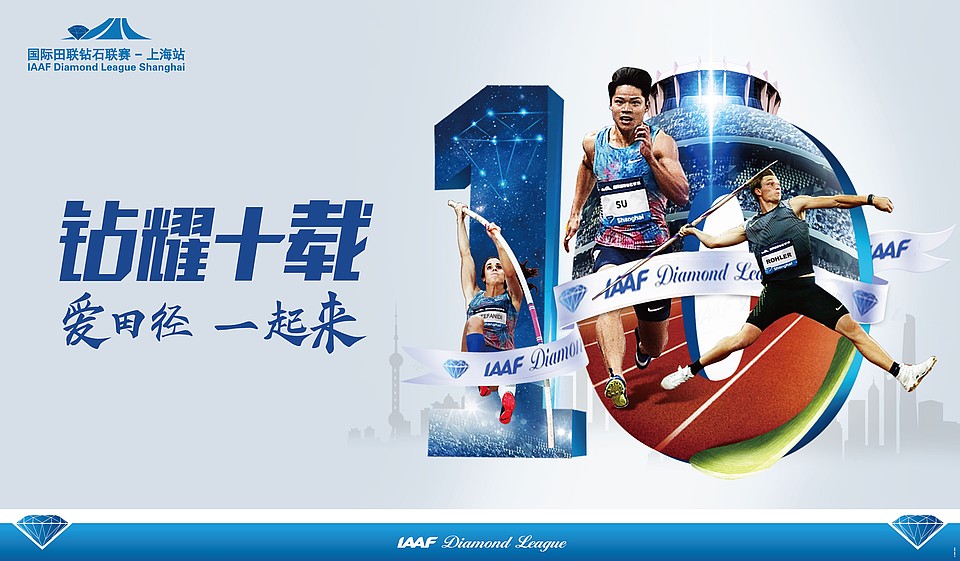 Chinese sprint sensation Su Bingtian is set to clash with heavy competition when he bids to regain his 100m crown at the 2019 Shanghai Diamond League on Saturday 18 May, the second stop on the International Association of Athletics Federations’ global circuit of premier one-day meetings.

Twelve world and Olympic champions are among the galaxy of stars announced today, along with five of China’s top international athletes. The stellar line-up includes eight gold medallists from the London 2017 IAAF World Championships and four who struck gold at the Rio 2016 Olympic Games, plus two world indoor champions from Birmingham last year.

One of those is Christian Coleman, the US sprinter who smashed the 20-year-old world indoor 60m record to take victory ahead of Su and then scorched to a sensational 100m time of 9.79 seconds to win the Diamond League final in Brussels last summer.

Coleman skipped the indoor season this winter, while Su blazed a trail across Europe, running the world leading time of 6.47 at the Birmingham Grand Prix, just five hundredths outside the Asian record he set in the same city last year.

While Coleman withdrew from last year’s Shanghai meeting, Su was pipped for victory in a photo-finish by Britain’s Reece Prescod and will be keen to regain the crown he made his own in 2017.

The Guangzhou native will return to Shanghai full of confidence after lowering his national record to 9.91 last summer and twice equalling the Asian record before taking 100m gold at the Asian Games in Jakarta last August.

The 200m will also promise fireworks with Ramil Guliyev present in Shanghai. The Turkish sprinter was sixth in the 100m last year but went on to add the European 200m title to his world crown in Berlin, setting a Turkish record in the process.

China’s own world champion, Gong Lijiao, returns to Shanghai in a bid to win the women’s shot put contest for a fifth time after her crowd-pleasing victory last year.

So too does Lyu Huihui, who unleashed a meeting record of 66.85m to take women’s javelin victory 12 months ago.

China’s Asian Games jump champions, Wang Jianan and Wang Yu, will also take on the world’s best on home soil as they contest for long and high jump points respectively.

Chinese fans will be treated to a number of other tasty head-to-head battles, not least in the 110m hurdles when world and Olympic champion Omar McLeod bids for a fourth consecutive victory in the meeting’s spotlit event against world silver medallist Sergey Shubenkov.

The Jamaican made Shanghai history last year when he completed the meeting’s first ever sprint hurdles hat-trick, a feat not even McLeod’s boyhood hero Lui Xiang could achieve in his hometown stadium.

McLeod’s fellow Jamaican Elaine Thompson will be one of the big draws of the women’s track events with the double Olympic champion racing against Marie José Ta Lou over 100m. Thompson scorched to a 10.78 win here two years ago but Ta Lou was beaten just once over 100m in 2018 and claimed the African and Continental Cup titles.

The world’s number one steeplechaser, Beatrice Chepkoech, goes over the barriers for Kenya, while Olympic Champion, Kerron Clement, heads the line-up in the men’s 400m hurdles.

Olympic, world and European champion Katerina Stefanidi will be the woman to beat in the pole vault. And Germany’s reigning Olympic and world champions, Thomas Röhler and Johannes Vetter, bid for early season bragging rights in the men’s javelin.