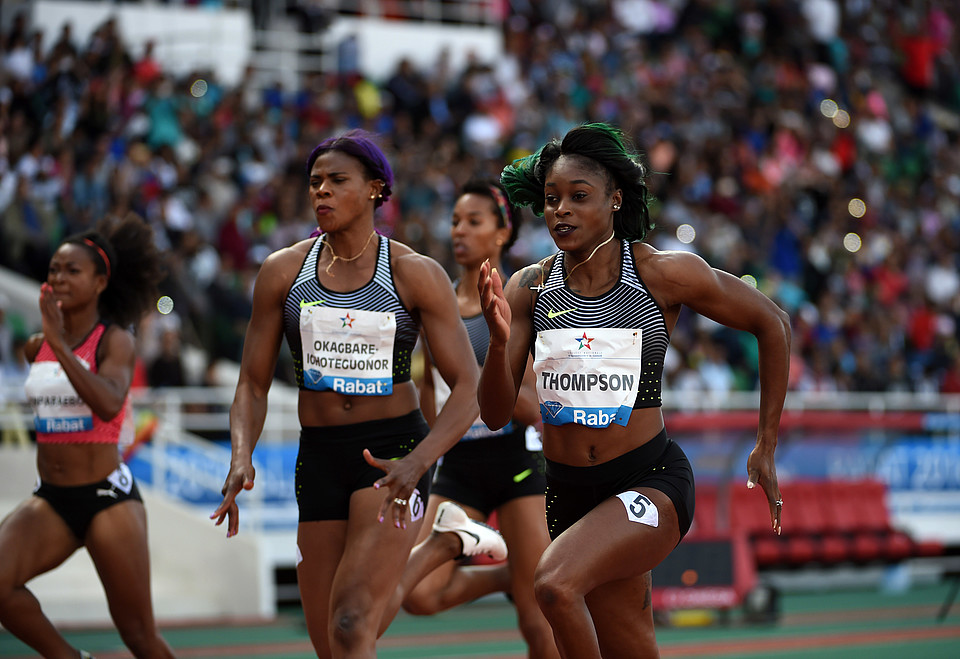 Sprint fans are in for a treat at the Shanghai Diamond League meeting on Saturday on 13 May when some of the fastest men and women on the planet will be burning up the track in the hunt for early season points on the International Association of Athletics Federations’ global circuit of one-day meetings.

No fewer than eight Rio Olympic finalists will appear in the men’s 200m and women’s 100m events in Shanghai with four past or present Olympic champions among them.

Star billing goes to double Olympic champion Elaine Thompson who returns to China for the first time since winning a silver medal over 200m at the Beijing 2015 World Championships.

The 24-year-old went on to make history when she became the first Jamaican woman to take two Olympic sprint golds by storming to victory twice in Rio last summer.

She broke her nation’s 100m record when she clocked 10.70 at the Jamaican Championships in early July and remained unbeaten over the shorter sprint throughout 2016.

That’s a record she will be keen to maintain in Shanghai when she faces a world-class field that includes Olympic silver medallist Tori Bowie, plus Olympic and world long jump champion Tianna Bartoletta, and Rio 100m and 200m finalists, Michelle-Lee Ahye of Trinidad and Tobago and Marie-Josée Ta Lou of the Ivory Coast.

Bowie went on to win a bronze medal in the 200m and claimed a relay gold for USA alongside Bartoletta, while Ta Lou and Ahye placed fourth and sixth respectively in both the 100m and 200m finals. Ta Lou set personal bests in both Olympic finals, breaking her national record in the 200m when she ran 22.21.

Add to the mix the experienced Jamaican, Veronica Campbell-Brown, a double Olympic and former world 200m champion, and Thompson will have a fight on her hands to claim maximum points on her Shanghai Diamond League debut.

The scrap for points could be even tighter in the men’s 200m, which features the sprinters who placed fourth, fifth, sixth and seventh in the Rio half-lap final.

Britain’s 2014 European Champion, Adam Gemili, was the man who just missed out on an Olympic medal when he finished fourth ahead of the Netherland’s European 100m gold medallist, Churandy Martina. USA’s former world and Olympic 400m champion LaShawn Merritt was sixth in the Rio 200m final while Panama’s former world silver medallist Alonso Edward was seventh.

All four will meet again in Shanghai where they will be joined on the start line by two more sub-20-second men – Rio semi-finalist Ameer Webb of USA and Jamaican Julian Forte – plus the Chinese record-holder, Xie Zhenye, who made the 100m semi-finals in Rio and helped China to fourth place in the 4x100m relay.

Two world champions will meet in the men’s 100m, a non-Diamond League event, when Kim Collins and Justin Gatlin go head-to-head. Collins won the world title in 2003 and was a semi-finalist in Rio at the age of 40, while Gatlin won the spring double at the 2005 Worlds in Helsinki and took Olympic silver in Rio.

Su Bingtian, another Rio semi-finalist, will give the home crowd plenty to cheer as he aims to get close to his own national record of 9.99.