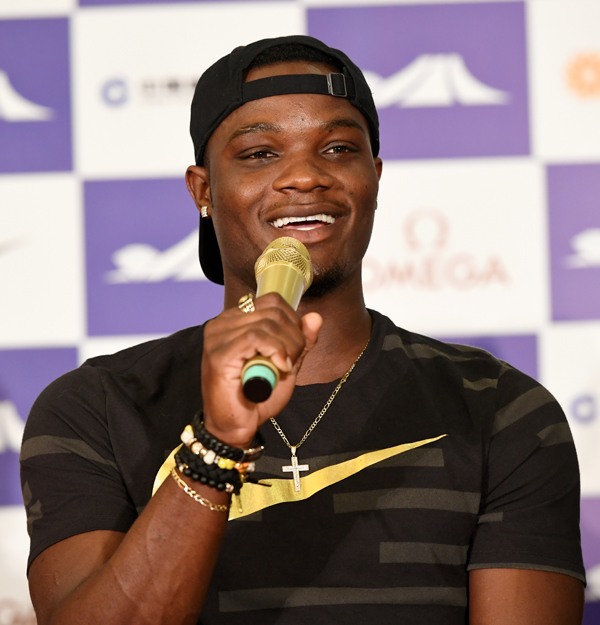 Olympic 110m hurdles champion Omar McLeod is aiming to break the 13-second barrier again at the Shanghai Diamond League meeting on Saturday (13 May), which he declared his favourite meeting on the circuit this afternoon.

McLeod clocked a blistering 12.98 to win the prestigious Shanghai hurdles event 12 months ago, a time that remained the quickest in the world throughout 2016. He went on to take the Olympic title in Rio and is targeting a similar speedy victory tomorrow to set him up for an assault on the World Championships in London later this year.

With a world lead of 13.04 at the Drake Relays in Des Moines two weeks ago, the young Jamaican already looks on course to repeat his incredible 2016 season.

That all started in Shanghai and McLeod believes the meeting’s special reverence for his event will inspire him to grab the headlines again.

“I love this meet,” he said. “This is my favourite meet of all. This is where I ran my fastest time last year and I’ve opened up with 13.04 this time so the goal is to go sub-13 again, for sure.

“I don’t want to dwell on times too much, although it is in the back of my mind to get sub-13 tomorrow, but otherwise the goal is to go hard and have fun because when I do that the times take care of themselves.”

McLeod became the latest sprint hurdler to follow in the footsteps of China’s 2004 Olympic champion, Liu Xiang, last year, not only by winning gold in Rio but by clinching victory in the city where Liu made his name and hurdling became the track fans’ obsession.

“I love that,” said McLeod, who missed Liu’s meeting record last year by just one hundredth of a second. “The organisation here is superb and the track is literally right outside the hotel which is pretty unique.

“But it’s also the atmosphere in the stadium. You can tell this is a hurdling country because of Liu Xiang. They love the hurdles here and the adrenaline from that just gets you going.

“The hurdles is always the last event of the night so everyone is just waiting for it. I love it and I love this meet.”

Still only 23, McLeod admits he won the Olympic title early in his career, and knows the gold medal heaps extra pressure on his shoulders as he seeks to add the world crown to his collection this summer.

“There are a lot of expectations on me this year as an Olympic champion, especially as there’s a World Championships to go for,” he said. “I’ve kept my preparations simple because in Jamaican they expect a lot from me now.

“But I love pressure; pressure is a privilege. After all, pressure makes diamonds and we’re at the Diamond League, so you have to love it. I thrive off it. It brings out the best of me.

“Being Olympic champion everybody is striving for you, everybody is training to beat you, so I have to train twice as hard. I am really excited to see what they have for me tomorrow.”

McLeod isn’t the only Jamaican Olympic champion racing here, of course, as Elaine Thompson, the women’s double sprint champion from Rio, will make her Shanghai debut over 100m.

Thompson has already shown that she is the woman to beat this year by running a wind-assisted 10.75 in Kingston last month followed by a dominant victory over world 200m champion Dafne Schippers in the half-lap race Doha last weekend.

“In Doha, I surprised myself,” reflected Thompson, who clocked 22.19 into a strong headwind. “I didn’t think I would go that fast so soon.

“We’ll see what happens tomorrow but this is all about preparation for the World Championships for me. My mind is already looking for forward to that.”

“As long as I stay focused I know I’ll be in good shape,” said Thompson. “I knew one day I could be Olympic champion but it all happened so fast last year.

“That doesn’t mean I don’t have things to improve, especially in the blocks. I need to be more explosive in the blocks and that will help me be even better at the finish.

“That’s what I’m concentrating on tomorrow.”