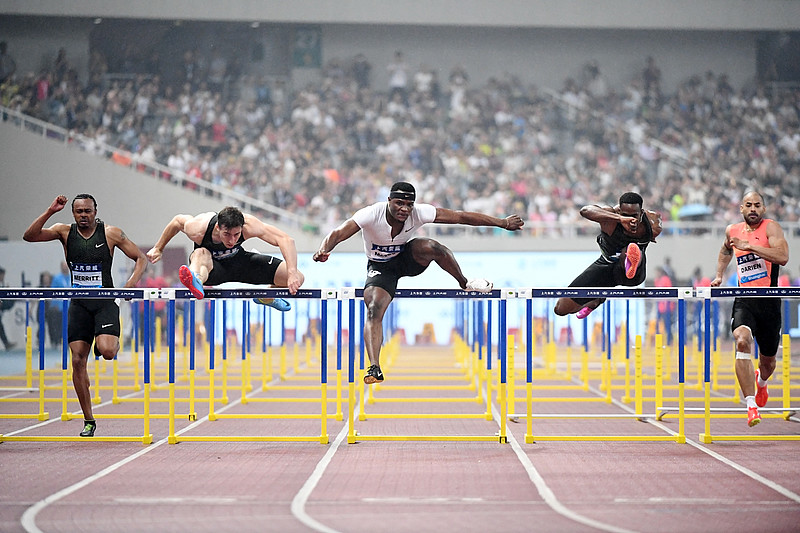 World and Olympic champion Omar McLeod will target a fourth successive victory in the men’s 110m hurdles when he returns to the Shanghai Diamond League on 18 May for the one-day meeting’s headline event.

The Jamaican sprint hurdler made history last year when he completed a hat-trick of Shanghai hurdles wins to become the most successful athlete ever in the meeting’s traditional blue riband contest.

The 25-year-old shrugged off injury niggles to beat Spain’s Olympic silver medallist, Orlando Ortega, and claim his third straight title in a world-leading time of 13.16 seconds.

More significantly, he moved ahead of his boyhood hero, Liu Xiang, who enjoyed two crowd-pleasing victories at his home-town meeting before his retirement in 2012.

Achieving the ‘three-peat’ at his favourite one-day meeting 12 months ago, left McLeod “overcome with emotion”.

“The appreciation and respect they have for hurdlers here is really special to me,” said McLeod. “I always want to go out there and do my very best just for the fans, to show my appreciation for the appreciation they show for me.”

The Jamaican’s first Shanghai victory came in 2016 when he clocked a world leading 12.98 to grab the title ahead of two world champions and the world record holder. He went on to claim the Rio Olympic gold in front of Ortega, the former Cuban he beat in a neck-and-neck tussle to retain his Shanghai crown in 2017.

He added world outdoor gold to his collection in London that summer and returned to Shanghai last May where again it was Ortega who poised the greatest challenge to his reign.

Others aiming to wrest the crown from McLeod’s grasp include 2015 world champion Sergey Shubenkov, who was second behind the Jamaican at the London World Championships and third here last year, and the 2012 Olympic champion and world record holder, Aries Merritt, who is seeking a first Shanghai victory on his eighth appearance at the meeting.

Merritt will be joined by fellow-American Devon Allen, who was fifth in the Rio Olympic final, while the reigning world and European indoor champions, Andy Pozzi of Britain and Milan Trajkovic of Cyprus, are also in the field.

The men’s 400m hurdles field is no less loaded, topped by Qatar’s world number one and newly-minted Asian champion, Abderrahmane Samba, who is looking to extend an unbeaten streak that stretches back to the London 2017 World Championship final, where he was seventh.

The former Mauritanian not only went through last year’s Diamond League campaign without losing, but lowered the Qatari record on five occasions, the Asian record three times and finished his 2018 campaign by taking gold at the Asian Games and the IAAF Continental Cup.

Those looking to knock the 23-year-old off his perch in Shanghai include Turkey’s world silver medallist, Yasmani Copello, and Rai Benjamin who broke the North American record running 47.02 in Eugene last June.

Olympic finallist Annsert Whyte of Jamaica is also in the line-up while Feng Zhiqiang flies the flag for China.