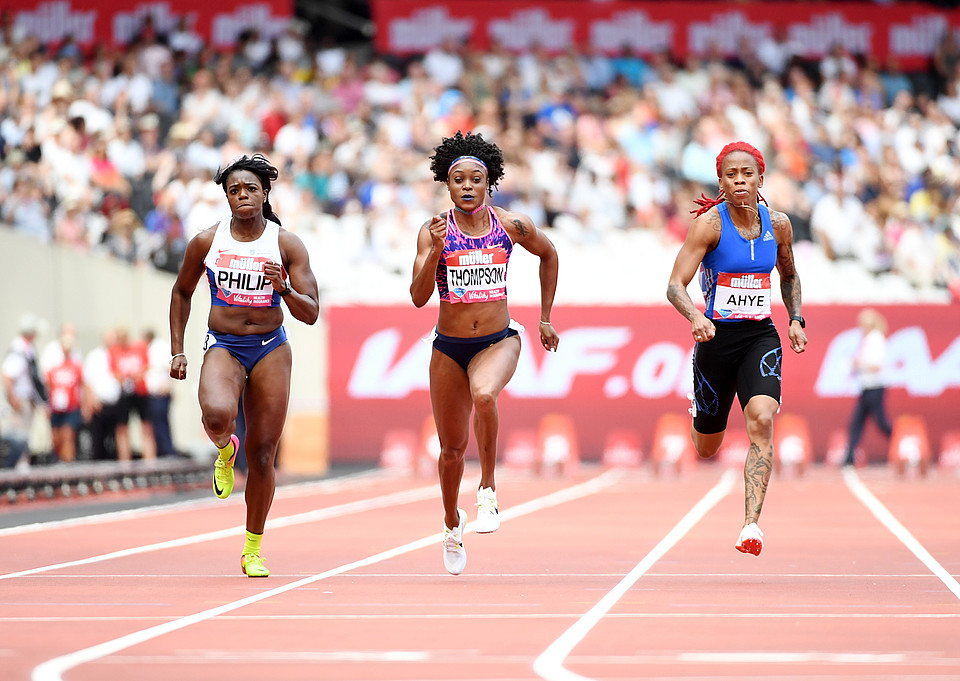 Shanghai Stadium will be packed full of action this Saturday. In this article you will find out everything you need to know about the women's events about to take place.

Jamaica’s double Olympic champion Elaine Thompson faces no fewer than six other women who have broken 11 seconds for 100m on the track where she scorched to a 10.78 second victory in 2017.

After a below par season in 2018, Thompson will hope to be back to her brilliant best in Shanghai as she faces world and Olympic finalist Michelle-Lee Ahye of Trinidad and Tobago and Blessing Okagbare-Ighoteguonor, Nigeria’s former world and Olympic long jump silver medallist who was a Shanghai 100m winner back in 2015.

The field also includes a trio of up and coming US stars in national collegiate champion Aleia Hobbs, Continental Cup bronze medallist Jenna Prandini, and Ashley Henderson. All have dipped under the 11-second barrier.

Wei Yongli can proudly boast of that achievement too after running 10.99 in France last July and the former Asian Games champion will no doubt be targeting a few notable scalps in front of her home crowd.

Naser collected a hat-trick of titles in 2018, winning Asian Games gold in Jakarta just five days before claiming the Diamond League trophy in Brussels, followed a week later by victory at the Continental Cup in Ostrava.

She also broke the Bahraini record three times, culminating with a best of 49.08 in Monaco where she was second to Olympic champion Shaunae Miller-Uibo, her sole defeat during last year’s outdoor campaign.

The biggest threat to Naser in Shanghai could come from Shakima Wimbley and Jessica Beard, who together with McLaughlin make up a three-pronged US attack on the Bahrainian’s supremacy.

World and Olympic finalist Stephenie Ann McPherson goes for Jamaica while Lisanne de Witte of the Netherlands is looking to threaten the 50-second barrier and make her mark on the world stage.

European 5000m champion Sifan Hassan takes on the world’s best metric milers as she returns to the Shanghai Stadium for the first time since her breakthrough performance in the same venue exactly five years ago.

Hassan was just 21 on 18 May 2014 when she smashed the Dutch under-23 record for 1500m placing third in 4 minutes 1.19 seconds. She went on to break the four-minute barrier in her very next race, claiming the Dutch senior record in the process, and won European gold at the same distance that summer.

She added European and world indoor titles at 1500m over the next two years and last August became the continent’s 5000m champion in Berlin before setting her first world record running 14:44 for 5km on the roads in Monaco this February.

Now 26, the Ethiopian-born star of Dutch distance running will be hoping to take that form onto the track when takes on a clutch of quick Africans on Saturday.

Her main challenge could come from her birth nation in the shape of former world indoor silver and bronze medallists, Gudaf Tsegay and Dawit Seyaum, while last year’s African champion, Winny Chebet, and her fellow Kenyan, Nelly Jepkosgei, should also be in the mix.

World and Olympic finalist Rabab Arrafi has been showing good form recently and set a Moroccan record of 3:59.15 in Lausanne last July, so she could well figure in the dash for home.

With a best of 3:56.05 from 2015, Hassan will be favourite to take an early season victory, but there are four other women in the field with sub-four minute times to their names and all will be keen to gain Diamond League points.

World record holder Beatrice Chepkoech defends her Shanghai title hoping for a more comfortable in 2019 as she takes on a trio of Kenyan youngsters over the barriers.

Chepkoech won last year’s rain-affected race thanks to Norah Jeruto’s slip in the home straight after the pair had broken free before the final lap. This time she is likely to have the 20-year-old double world junior champion, Celliphine Chespol, on her shoulder with teenagers Mercy Chepkurui and Fancy Cherono in their shadows.

Chespol shocked the world when she broke the African record as a 17-year-old in Eugene two years ago, although Chepkoech lowered that in Monaco last July when setting the new world best mark of 8:44.32. Chepkoech went on to win the Diamond League final in another sub-nine minute time and claimed the Continental Cup crown 10 days later.

Bahrain’s Asian Games champion, Winfred Yavi, will be looking to derail the Kenyan train along with another teenager, Peruth Chemutai, who ran a Ugandan record in that Monaco race last year.

The Olympic, world and European champion was a dominant winner of the Diamond League final last year but had to settle for second in the Continental Cup and could only finish fourth at the European Indoor Championships in Glasgow this March.

Morris looks primed to take advantage if Stefanídí underperforms in Shanghai. The US vaulter led the world last year with a best of 4.95m having won the world indoors in Birmingham earlier in the year, and she made a promising opening to her 2019 campaign when clearing 4.76m last month.

Li will also have the wind in her sails after winning her third successive Asian title in Doha last month having retained her Asian Games crown in Jakarta last August.

Stefanídí’s fellow Greek Nikoleta Kiriakopoulou is another potential threat if she can approach her 2015 best of 4.83m, while Katie Nageotte showed good form indoors this year and will hope to improve her outdoor best of 4.80m.

Gong Lijiao bids to win a fifth Shanghai Diamond League shot put title in the stadium where she channelled ‘China Power’ 12 months ago to notch up her fourth victory and cement her status as the best in world.

Gong went on to claim Continental Cup titles for Asia last September and returns to Shanghai this year in the form of her life after winning the Asian title in Doha only last month to extend an unbeaten run of outdoor victories that stretches back to July 2017.

That’s some 19 meetings without defeat, a sequence that includes the 2017 world title in London, as well as 2017 and 2018 Diamond League trophies, plus her second Asian Games crown last August.

Last year the 30-year-old world champion delighted home fans when she won by more than a metre over Danniel Thomas-Dodd, and Jamaica’s Commonwealth Games champion is set to be one of her main rivals again after extending her national record last month.

Others who will try to break up Gong’s winning sequence include Poland’s Paulina Guba, who won the European title in Berlin last summer, and Hungary’s world indoor champion, Anita Marton.

Chase Ealey will also be a threat. She tops this year’s world list with 19.67m and will be joined in the circle by three other US throwers, Jessica Ramsey, Maggie Ewen and Dani Hill, all of whom can breach 19m at their best.

Like Gong, home grown javelin star Lyu Huihui is looking to defend her Shanghai title from 2018 having lit up the crowd 12 months ago with a meeting record in front of the stadium’s dedicated section of superfans.

Like Gong, she went on to claim the Continental Cup title and added the Asian crown to her collection in Doha a few weeks ago.

Lyu will be full of confidence after her victory in the Qatari capital, which came just a week after she broke the Asian record in Huangshi to lead the 2019 world javelin standings by almost two metres.

Among her rivals on Saturday is South Africa’s Olympic silver medallist, Sunette Viljoen, who will be hoping to improve on sixth place last year, plus Germany’s European champion, Christin Hussong, and Belarussian thrower, Tatsiana Khaladovich, who won the European title in 2016.