A sneak preview of the women's events 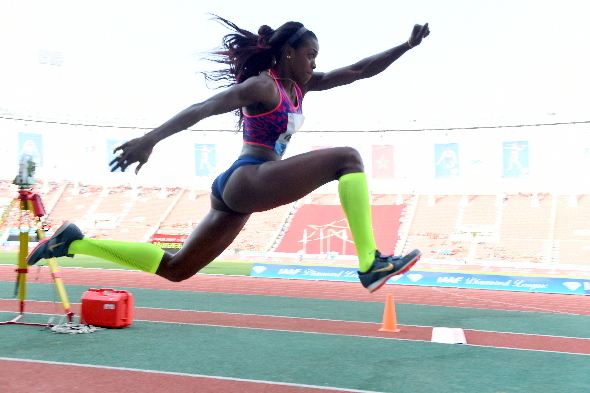 Miller-Uibo broke 50 seconds to win the one-lap race in Shanghai last year but the Bahamian steps down in distance after taking the Commonwealth crown at 200m earlier this month.

Shanghai also welcomes back Ta Lou who was third in the 100m last year and returns for the longer sprint in 2018 after winning two silvers for the Ivory Coast at last summer’s London Worlds and taking an impressive 100m victory in Doha last week with a personal best and world leading time of 10.85 seconds.

Olympic 400m bronze medallist, Shericka Jackson, is also looking for some speed work after picking up 200m silver behind Miller-Uibo at the Gold Coast Commonwealths. She takes the place of fellow Jamaican Elaine Thompson, the double Olympic sprint champion who has been forced to pull out.

Switzerland’s Mujinga Kambundji, a world indoor bronze medallist at 60m this year, will look to impress at the longer distance, while the domestic challenge is provided by Wei Yongji, a two-times Asian champion at 100m.

The women’s sprint hurdles field is topped by world record holder Kendra Harrison who goes into the outdoor season full of confidence after winning her first global title at the World Indoor Championships in Birmingham this March.

It was first blood to Harrison last week in Doha when the world record holder clocked 12.53 to push McNeal into second place.

China’s cause lies with former Asian junior and senior champion, Wu Shuijiao, while Norway’s former world youth and junior champion, Isabelle Pedersen, will be looking for another good run after she was sixth in Doha.

Americans top the billing in the women’s one-lap hurdles with Olympic champion Dalilah Muhammad and her compatriot Georganne Moline holding the two quickest personal bests in the field.

Muhammad was beaten by USA’s Kori Carter at the World Championships last summer but went on to win the Diamond League final in Brussels a few weeks later.

The US pair will face a Jamaican duo of world and Olympic finalists in Janieve Russell and Leah Nugent, plus the two-time African champion, Wenda Nel of South Africa.

The line-up is completed by Denmark’s European champion and Rio Olympic silver medallist, Sara Slott Petersen, Joanna Linkiewicz, the Pole who took European silver two years ago, and Sage Watson, another London 2017 finalist from Canada who will be in the hunt for Diamond League points.

World Championship finalist Beatrice Chepkoech changes discipline to top a women’s steeplechase field loaded with Kenyan talent just a month after she picked up a silver medal at 1500m at the Commonwealth Games in Australia last month.

Chepkoech, who was fourth in the steeplechase final at the Rio Olympic Games and at the London Worlds, won her first major honour when she was second over the metric mile on the Gold Coast.

Winfred Yavi will try to break the Kenyan stranglehold – she was eighth in the World Championship final for Bahrain – as will Ethiopia’s experienced Birtukan Adamu, an African junior champion back in 2011, and her young countrywoman, Maritu Ketema, an African junior silver medallist last summer.

All eyes and expectations will be on Mariya Lasitskene, the world indoor and outdoor high jump champion, who set a Diamond League record of 2.06m in Lausanne last year before winning the overall trophy in Brussels.

Lasitskene has been unbeaten indoors or out since June 2016, a remarkable run of 39 meetings that’s included 22 performances of 2.00 metres or higher and has seen her move to equal fifth on the world all-time list.

Among those who’ll be trying to end the 25-year-old’s superb sequence on her Shanghai debut is St Lucia’s first ever Commonwealth Games champion, Levern Spencer, who leads the world this year with her gold medal-winning leap of 1.95m, Bulgaria’s Olympic silver medallist Mireva Demireva and world and Olympic finalists, Marie-Laurence Jungfleisch of Germany and USA’s Inika McPherson.

Sweden’s Erika Kinsley will also hope to be in the points after she finished seventh at the World Indoors in Birmingham two months ago.

Double world and Olympic champion Caterine Ibarguen will be looking for a winning return to Shanghai after taking maximum points here in 2013 and 2015.

The 34-year-old’s South American record of 15.31m puts her fifth on the world all-time list and makes her the only woman in the last eight years to go beyond 15.10m.

The Colombian’s challenge here will be to see off the threat of Jamaica’s Commonwealth champion Kimberly Williams and her silver medal-winning teammate Shanieka Ricketts.

Williams leads the world this year with 14.64m from the Gold Coast where she won her second major medal of the year having taken silver at the World Indoors in Birmingham in March.

Ricketts is also in form. A World Championship finalist in London last summer, she leapt 14.52m to grab the runner-up spot on the Gold Coast.

Poland’s world and Olympic finalist Anna Jagaciak is also in the line-up, as is Viktoriya Prokopenko who was seventh at the World Indoors in Birmingham.

Home support helped carry Gong Lijiao to her third Shanghai DL shot put victory 12 months ago and the Chinese favourite will be hungry for a fourth when she returns to action following her dream season in 2017.

Gong came under pressure from USA’s Daniella Bunch last May before claiming her third win at the Shanghai meeting with a best of 19.46m. But that was just the start for the 29-year-old who had previously amassed four World Championship and three Olympic medals in her career, but never a gold.

That all changed in London last August when a fifth round throw of 19.94m handed Gong the world title ahead of Anita Márton. She duly added the Diamond League crown in Zürich a fortnight later and ended the year with only one defeat from 12 meetings.

Márton will be one of Gong’s main opponents again, as will Bunch, now known as Daniella Hill. The 29-year-old Márton will be full of confidence after breaking the Hungarian record to win the world indoor title in Birmingham while Hill will be aiming for her first Diamond League victory after three second places last year.

Jamaica’s newly crowned Commonwealth champion, Danniel Thomas-Dodd, is also in the field, as is the woman she beat at the Gold Coast Games – Valerie Adams, New Zealand’s double Olympic and four-time world champion who returns to Shanghai after becoming a mother last year for the first time since winning here 2010.

USA’s world and Olympic finalist, Raven Saunders, shouldn’t be discounted, nor should Gong’s teammate, Gao Yang, who has just missed out on medals at recent indoor and outdoor world championships.

Lyu Huihui will also have high hopes of registering another home victory in the javelin after setting an Asian record of 67.59m in qualifying at the London World Championships last summer before bagging bronze in the final.

Lyu already lies second in the world this season after throwing 65.66m last month, but she will have to be on top form to beat a field containing South Africa’s Olympic silver medallist Sunette Viljoen, who was third at the recent Commonwealth Games, and Australia’s Commonwealth silver medalist Kelsey-Lee Roberts, not to mention former world champion Katharina Molitor of Germany.

Canadian record holder Liz Gleadle, who won the Pan American title in 2015, is also a proven winner, while Turkey’s up-and-coming record-breaker Eda Tugsuz could well raise some eyebrows. The 21-year-old broke her national senior and European under 23 record last year, and went on to place fifth at the London World Championships.

Slovenia’s former world and Olympic finalist, Martina Ratej, is also in the line-up, as is Liu Shiying, the 2015 Asian champion who’ll be keen to regain the area record from Lyu. She broke it last May only for Lyu to claim it in London.